As automotive manufacturers produce vehicles with an increasing number of features, the expectation of reliability and performance increases as well. Reliability trickles down to component manufacturers, including (and perhaps especially) those who design and produce integrated circuits (ICs). With the rise of self-driving cars and digital cockpits, the demand for ICs will only increase. Therefore, it is extremely important for IC manufacturers to be able to design and test products accurately to ensure that they perform as expected across all temperature ranges–even extreme cold or extreme hot.

As it turns out, the traditional and typical method for temperature testing comes with some severe flaws. Most companies implement a high-temperature testing that is not truly able to precisely set and test at a specific temperature. With the need for parts-per-billion-type reliability, it has become incumbent on IC manufacturers to be able to provide a production test method that is as precise as possible. For this reason, Monolithic Power Systems (MPS) has unlocked a way to test parts at precisely set device temperatures like never before.

Typically, IC manufacturers conduct temperature testing using gravity handlers, a specific type of testing hardware, during production. These handlers, when used for testing across various temperature ranges, are often unable to hold a specified temperature accurately for an extended period of time—in other words, there could be a large gap between the temperature required and the temperature applied (see Figure 1). Temperatures at the test site can drop as much as 20°C in three to five seconds. This can make it difficult, if not impossible, to screen out extreme temperature-related defects, such as cold temperature start-up or over-temperature trimming issues. This is because handlers are typically calibrated to manufacturer factory standards. The ambient air temperature in the handler must be calibrated in predefined locations, like the soak chamber and plunger module, to match the temperature displayed on the handler’s display (see Figure 2). The air blown on devices at certain locations may be at a correct temperature, but this does not guarantee that the part being tested is set to the same junction temperature (TJ). In particular, the test hardware printed-circuit board (PCB) combined with the test-site contactor act like a giant heat sink on the heated part.

We at MPS have benchmarked this industry standard method to see just how pronounced the temperature gradient might be, and the results were astonishing. Figure 3 shows the industry-typical testing temperature performance of 125°C and -40°C. Both the hot and cold temperature curves show a ~20°C temp shift and are highly unstable until three to five seconds into the test. When considering that the average test time for an analog IC is between five and eight seconds, it is obvious that many of the tests being performed today are actually being done under a massive temperature change and never at the junction temperature. 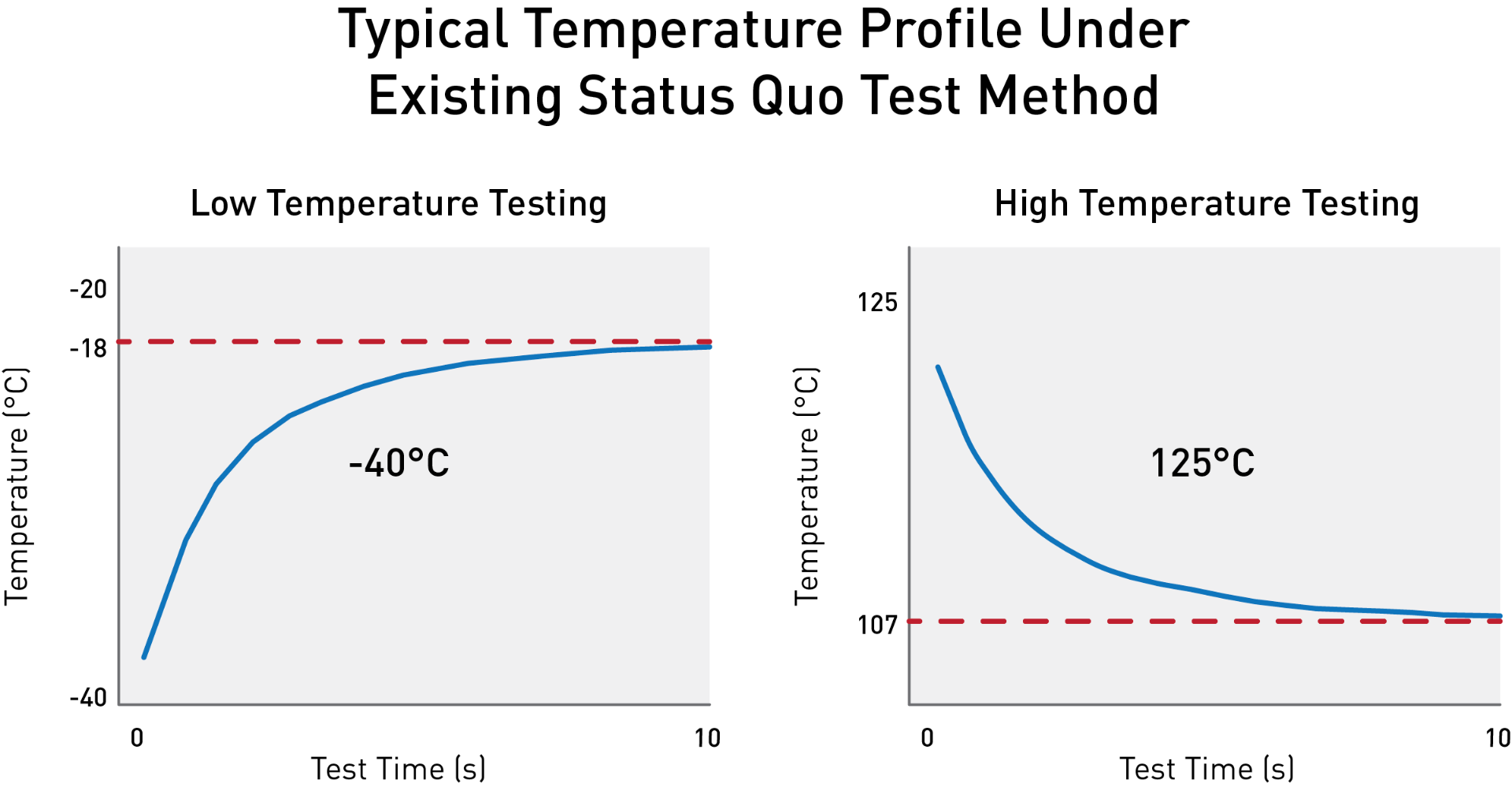 So where is this temperature drop coming from? We were able to identify numerous sources, the most significant of which include:

There are two common industry practices for overcoming this issue. The first is to simply overdrive the handler temperature so the stabilized temperature after five seconds approaches the TJ. For example, to run a test at 125°C, the handler would need to be set to 145°C. The problem with this method is that a large temperature decay can still can create a host of unnecessary issues, such as reduced yields and QA failures, and generally requires the IC to be compliant at far higher temperatures than they are targeted since the majority of testing would still be performed during the initial three to five second duration.

The second method for overcoming temperature drops is to operate the part at its highest power level during testing to try to increase its temperature at the test site. This is suitable for power management and processor products where it is typical to expect a large internal device temperature rise due to ohmic or switching losses. There are three problems with this method. Firstly, extensive characterization must be performed to apply the correct power required for every new product. Secondly, the part may not be capable of operating at its required power mode during most tests, so the heating effect occurs sporadically at best during testing. This affects accuracy and consistency. Lastly, not all devices have high-power capabilities that allow them to be heated via this method.

To correct the lack of linearity and accuracy outlined above, we tackled the individual weak points systematically, collecting data through trial-and-error experiments to find the best solutions. Through this, MPS has developed a proprietary technique to test ICs at accurate junction temperatures, which is especially well suited for automotive-grade products (AEC-Q100).

This solution has the following measures implemented to create a linear, stable, and accurate test temperature:

Beyond the Status Quo

The results of this new solution are striking. Our benchmarks show a pronounced improvement in both temperature linearity and accuracy. Figure 4 shows the TJ test temperature characteristics at 150°C, 125°C, and -40°C. With the new MPS proprietary method, we see virtually no temperature decay, constant linearity of <1°C, and accuracy < ±1.5°C. 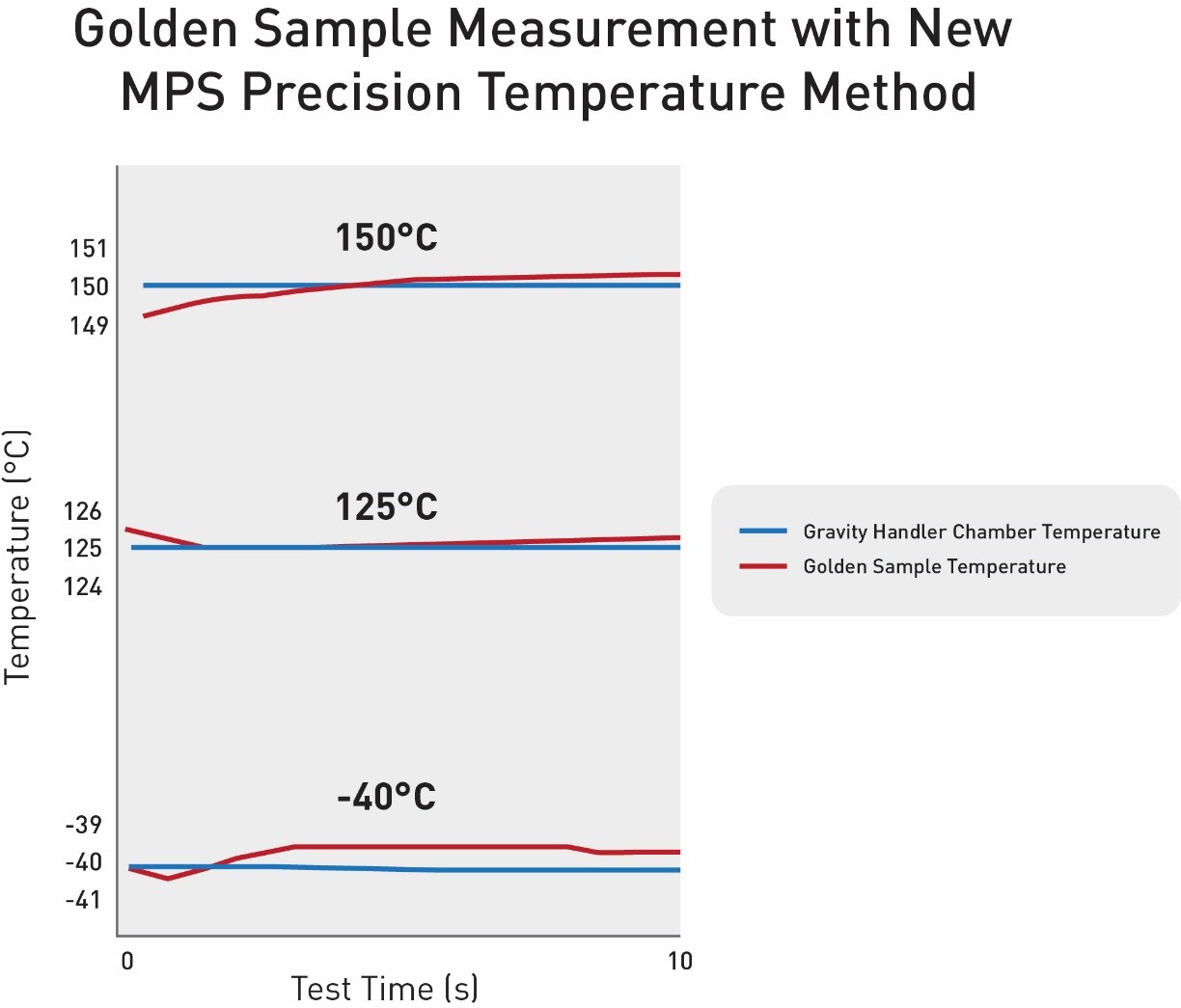 There are profound advantages of this enhanced temperature testing method. We observed fewer QA failures, which resulted in fewer production lots being put on hold, fewer engineering man-hours needed to disposition the hold lots, and a general increase in manufacturing throughput. This more consistent manufacturing set-up and accurate test characterization led to improved lot yields, and in general, we saw far fewer operator errors typically caused by incorrect temperature setting during the initial lot set-up.

The burden of automotive reliability ultimately falls on IC manufacturers to be able to test products accurately and precisely. However, with traditional temperature testing methods being done with such large temperature gaps, how can reliability and accuracy be guaranteed? MPS has solved this issue with our new proprietary, patent-pending temperature test system that guarantees that ICs are tested at a true junction temperature. This method is 100% implemented on all MPS industrial and automotive products to ensure that datasheet parameters are tested to specification. This system makes automotive-grade device testing quality highly accurate, allowing MPS products to achieve the gold standard of zero defects.

Did you find this interesting? Get valuable resources straight to your inbox - sent out once per month!