The secondary side of the forward circuit typically requires two freewheeling diodes for the excitation inductance and the output inductance. These diodes lead to considerable losses during the freewheeling process under high-current outputs. Therefore, MOSFET transistors are often used instead of diodes to improve efficiency. The forward converter’s primary-side main switch corresponds to the freewheeling process of the magnetizing inductance and the output inductor. As a result, the switching voltage of the secondary-side transformer can drive the secondary-side synchronous rectification (SR) MOSFET.

The freewheeling MOSFET has a gate-to-source voltage (VGS) that is rectified by the SR MOSFET’s drain-to-source voltage (VDS). When the magnetizing inductance and the output inductor current are both low, the output voltage turns on the rectifier MOSFET through the transformer. The secondary side then works in forced continuous conduction mode (FCCM), leading to a higher no-load loss than a traditional diode rectification topology.

When the output voltage is high, the triode voltage regulator circuit protects the secondary-side MOSFET’s VGS from reaching a high voltage (see Figure 1). Meanwhile, for the MOSFET gate that is connected to the emitter, the driving voltage follows any changes in the transistor’s base voltage. The transistor’s collector terminal can then take power from the transformer or the output voltage. 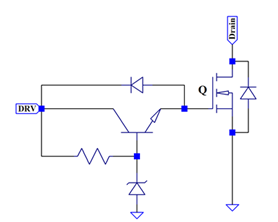 When the secondary-side rectifier MOSFET (QR) shuts down and the secondary freewheeling MOSFET (QF) opens, there may be transformer leakage inductance. The leakage inductance then affects the QR drain-to-source capacitance (CDS), and ringing is superimposed on VDS. Higher spikes affect the forward converter’s efficiency. A conventional RC absorption circuit can suppress VDS ringing on QR, though it also leads to a relatively large power loss.

An RCD absorption circuit is recommended to reduce power loss (see Figure 8). When QR starts up, the leakage inductance energy can be stored in a capacitor (C) through a diode (D). When QR shuts down, the energy stored in the capacitor can be transferred to the output capacitor and the load through the resistor (R). A larger-value capacitor results in a smaller ringing amplitude. Meanwhile, a larger-value resistor reduces the power loss and ringing amplitude. 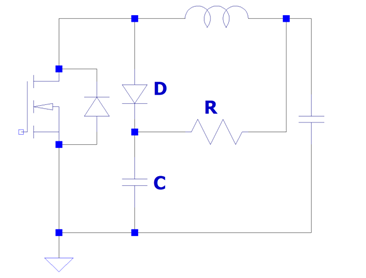 Figure 9 shows how the ringing peak drops by 20% with the addition of a Schottky diode (D). In this scenario, the capacitance (C) can be set to 2.2nF, and the resistance (R) can be set to 20kΩ.

Figure 9: Ringing Periods Before and After Implementing a Schottky Diode

To verify the forward converter design, forward and flyback topologies at different power levels with an output voltage of 5V/3.3V were compared. In active-clamp forward topology, the auxiliary switch can work with zero voltage switching (ZVS) due to the delay time between when the main switch starts up and the auxiliary switch starts up. It should be noted that ZVS can become complicated with the main switch.

The inductor current can still flow through the body diode of the rectifier MOSFET, which clamps the voltage across the transformer at a lower voltage amplitude and prevents the main switch’s VDS from falling further. When the main MOSFET turns on, its VDS is almost equal to the input voltage, which can lead to start-up losses.

Figure 10 shows the prototype efficiency curve. As the output power increases, the forward converter’s efficiency is typically better than that of the flyback converter at higher output power levels due to the improved thermal management in PoE applications.

Did you find this interesting? Get valuable resources straight to your inbox - sent out once per month!

Latest activity a week ago